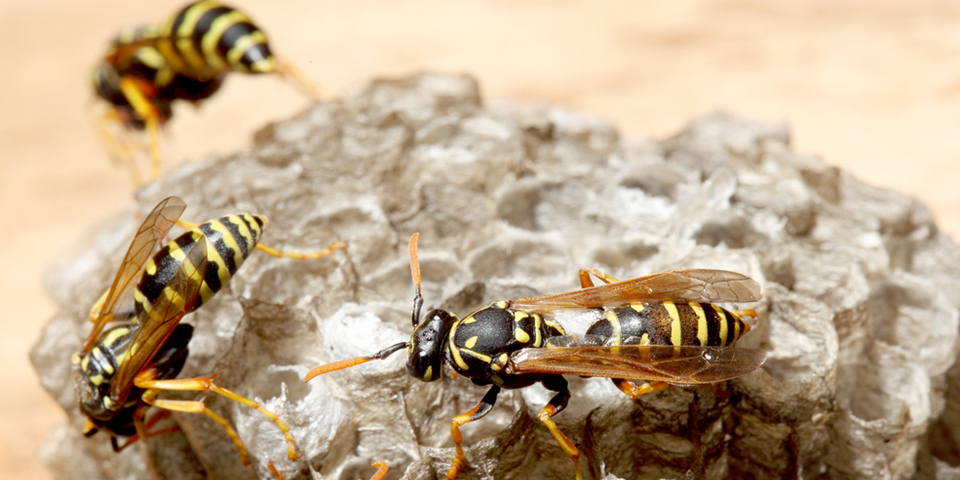 This diverse species of insects’ amounts to over 12,000 in Australia alone, with varieties ranging from the cicada and spider killing wasps to the very small diapriidae wasps, hardly visible to the human eye. The majority of wasps produce larvae that feed on other spiders and insects.

Adult wasps pollinate flowers as they feed on nectar

Most wasp species are self-sufficient, but some do form colonies, such as the paper wasps.

First discovered in Australia around 1959 as an introduced species, spreading since then to many districts, including Melbourne. Their nests can grow to 3 metres long, containing many thousands of wasps, especially during the warm weather conditions. They pose a real hazard at BBQs, when eating outdoors and especially for pets. If annoyed they will sting many times, and can be very dangerous causing asphyxiation in some extreme cases.

Around the same size as a honey bee but less hairy, the European Wasp has distinct triangle-shaped black and yellow body markings with long, black antennae. While flying, they hold their legs tucked into their body, with their wings folded when resting.

Many wasps’ nests are constructed underground, or hidden inside a wall cavity, a retaining wall or in a hollow tree. Varying in shape, the nest is usually always concealed, consisting of layers of cells covered with pieces of chewed up wood fibres on the outside.

In contrast, the Papernest Wasps’ nest is usually a lot smaller, partially or fully exposed with a honeycomb appearance, more commonly discovered hanging from a branch or on the underside of the house eaves. For assistance in wasp removal call in professional help.

Not much is worse than getting a wasp bite when trying to enjoy or maintain your yard! Our professionals can provides wasp pest control services at reasonable prices.

The Relationship Between Pests and Older Homes
August 11, 2021

The Five Most Dangerous Pests You Need Protection From
June 2, 2021